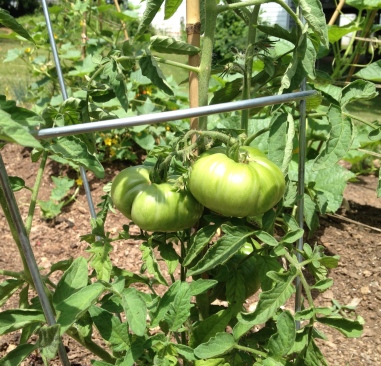 This tomato plant should be dead. I got it as a seedling — a Cherokee Purple — and transplanted out in mid-April, way too early for central Virginia. When frost hit, I covered the plant as recommended but all the leaves died overnight anyway. I should have pulled it then, but at the time I had no other plants with which to replace it. So I left the lonely stem there. A few weeks later, new branches emerged. Now the plant is heavy with fat green tomatoes. We both got lucky: not every mistake is fatal.

But! The plant would be farther ahead if it hadn’t been forced to regrow all its foliage. I could have been gloating over a stash of dusky heirloom fruits by now. I’ll know not to rush things next year.